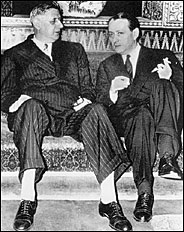 DeGaulle wore white socks with his pinstripes
in the NYT Sunday Book Review photo for Christopher Hitchens’s review of ‘Malraux’ by Olivier Todd.

Hitchens quotes Todd in saying the fabulist Malraux was ”autonomous in relation to facts.”

One of the characters in Flaubert’s ”Sentimental Education” is described as being so corrupt that he would happily have paid for the pleasure of selling himself. Malraux was such a fantasist that he would have paid handsomely for a forged narrative that was designed to deceive himself. He invented a relationship with Mao. He exaggerated his role in the Spanish Civil War. He fabricated a glorious past in the French Resistance.

Like all supreme con artists, he did possess the knack of being in the right place at the right time, and of scraping acquaintance with the great.

Speaking of the ”autonomous in relation to facts” but in present-day France, some are saying Chirac’s forthcoming TV address is ‘stage-managed’ (emphasis mine)

Mr Chirac, whose TV intervention, planned for last week, was postponed to this Thursday (14 April) because of Pope John Paul II’s funeral, is to debate with some 80 young people on national channel TF1.

Three topics will be discussed: the referendum on the EU Constitution, the perspectives for France in Europe, and Europe’s place in the world.

Whereas TF1 is praising “a direct dialogue, a spontaneous and free exchange”, some Journalist associations are said to be shocked by the “stage-managed information”, to be presented, according to Le Figaro

I am shocked, I tell you, shocked. The Bad Hair Blog could not ascertain what color socks Chirac will be wearing for the ocassion.

For more reading on fabulists, but on the domestic variety, I recommend Hitchens’s own book, No One Left to Lie To: The Triangulations of William Jefferson Clinton.