Red-State Moscow?
I’m old enough to remember the Cold War phrase “better dead than red”, meaning better dead than a communist. Of course, the meaning of the shade of political thought invoked by the color red has chenged, and now it’s supposed to convey a Bible-Belt republicanism that likes to meddle into censorship. 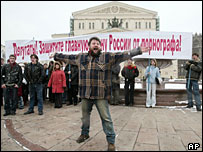 Well, people are seeing red in Moscow, over an opera written by an alleged pornographer. From the Beeb:
Fury over Bolshoi composer clones

Children of Rosenthal, composed by Leonid Desyatnikov and staged by Lithuanian director Eimuntas Nekrosius, has already caused much controversy and triggered a political debate.

Some deputies of the Russian parliament, the State Duma, want it banned.

Members of the youth movement Walking Together, who support President Vladimir Putin, have been staging daily pickets in front of the Bolshoi and burning books by the opera libretto’s author.

At this rate Putin won’t be getting a guest appearance in The Simpsons, unlike Tony Blair, who did.