Reality TV show: The Oracle of Omaha’s Search for the Next Oracle

Last evening I watched for the first time The Rebel Billionaire: Branson’s Quest for the Best. For the life of me I can’t figure out what the hey does bungee jumping has to do with running a sucessful business conglomerate. Branson does look like a fun guy (albeit a little hyper-active), has a lovely voice, and I like his clothes and real estate. His hair’s nice, and he doesn’t overuse pat phrases like “you’re fired”, so he’s two points ahead of The Donald. The program, however, had two finalists — one of which was the girl who invented Spanx — gab on and on to an audience of former finalists. Since the Spanx girl seemed to only talk about Spanx, the other guy won. At least, I believe that’s how the program went, since another family member and I were alternating the Billionaire with The Biggest Loser, where a guy who apparently’s been working out at the gym for three hours a day won.

I wonder what the winners of each show will look like in, say, six months.

(Eric has the scoop on The Amazing Race.) 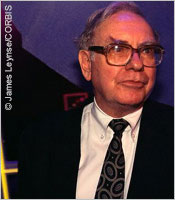 Anyway, while watching Branson and the clips of prior programs, where people were subjected to ridiculous feats, such as climbing to the top of a hot air balloon in flight, parasailing in tropical storms, etc., I decided Fox might have a sure winner with a “reality show” starring Warren Buffet. Buffet, a.k.a. as The Oracle of Omaha, has s been in the news recently, as you can read at Jack‘s, so there’s some pre-production publicity right there, yet he’s not tainted with a jailbird stigma like Martha. (There might be a problem with the “Oracle” word, though. Will have to work on the program’s name). He does have a slight combover, but his is more of an old-fogey style combover, not an obnoxious one like The Donald’s. Warren looks like a guy that’s not going to be making anyone physically jump through fire hoops, while he probably will make them jump through virtual hoops, sort of like an emotionally distant grandfather, yet a grandfather who’s not a godfather. Warren has a long-term record of success, has other billionaire friends, and (as you can see from the last link),

Buffett, chairman and CEO, told shareholders the board’s main job this year is to find a successor when he can no longer run the firm.