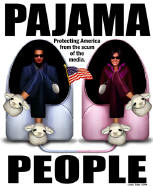 Via The Gantelope (who coined the PajamaLand name), a conspiracy theory on Rathergate from Rich at Shots Across the Bow that even includes NJ history:

What if it wasn’t botched, but planned to occur exactly as it has?

Here are the two key bits of information needed to solve this puzzle:

In August, 1974, President Nixon was forced to resign for campaign dirty tricks and the following coverup.

In Oct. 2002, Bob Torricelli, tainted by scandal and losing his bid for the New Jersey Senate, withdrew, and was replaced by Lautenburg at the last minute. Lautenburg went on to win the election, saving a crucial Democratic seat.

The light begins to dawn, doesn’t it my friends.

Rich sees Hillary’s hands in this. As The Gantelope says, “Colonel Mustard, in the Library, with an iMac”.

One thing for sure, until CBS comes clean on this, even more far-fetched theories will continue to surface.

And yet, what the heck does this rehashing of 30 year-old memorabilia (with clearly fake memos, at that) do other than distract us from the war today? CBS has lost all its integrity.