The first one, which I find astonishing, concerns the world’s most famous Zoroastrian rocker (and one of my favorites rockers of all time), and makes me wonder, did someone pull one on the ayatollahs?

Freddie Mercury gets official seal of approval in Iran

Rock band Queen, fronted by outlandish gay icon Freddie Mercury, have become the first rock band to be given the official seal of approval in Iran with the release of an album of their greatest hits, a source in the company that released the album said Monday.

“Authorities approved of the tunes that had a social theme, leaving out the love songs,” an executive in the company said.

Homosexuality is a capital crime (i.e., punishable by death) in Iran. 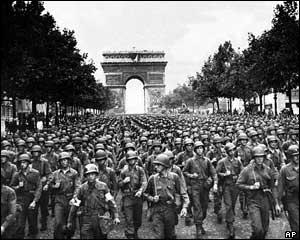 Not surprising at all, however, is the second item: France2 News has managed to report on the celebrations for the 60th anniversary of the liberation of Paris for several days in a row without once mentioning the role played during the war by the USA, the 28th Infantry Division, or, for that matter, any of the allies except Spain. (I didn’t even know Spain was one of the allies!) Last evening a Spanish veteran told news “We could liberate Paris, so we did”. Yeah, right.

The part played by America and its allies was put in perspective: During a report of the rehearsal for the “swing down the boulevards” show, Americans were mentioned once: “The Americans brought nylon stockings, chewing gum and swing music”.

A chronology of events in the France2 site mentions Swedish consul Raoul Nordling, but General Eisenhower‘s name or General Patton‘s — whose 3rd Army fought for two months before being able to reach Paris — are nowhere to be found.

Considering that D-Day celebrations took place with a total absence of American flags in Paris, I’m not surprised.

Update: Both stories, however, may tie in to (via Roger) the philosophy of as if.