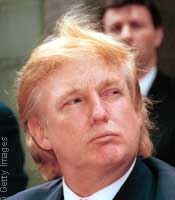 . . . is losing majority status in his casinos, according to Forbes, since he’s driven them to bankruptcy. This is not the first time he’s broken the bank, so to speak — the last time he blamed several of his executives after they died in a helicopter crash. This time, however, “Trump would also give up trademark rights to his name and likeness for use in connection with casino operations”.

Will he lose his place (#71) in the Forbes 400? Time will tell, but The Donald wasn’t pleased in the late 1980s when he disappeared from the list. Back then he blamed his loss of status on Malcolm, who Donald claimed was upset when Donald asked him to leave the bar at The Plaza when Malcolm showed up with a male friend that was rowdy.

No word as to whether there are plans for a makeover for The Combover.